December 2020: After reviewing the latest situation, we have decided to postpone our 60th Anniversary Celebration yet again, and the new date is Saturday 23 April 2022.  All other details remain the same, but if you have any questions, please don't hesitate to contact us.

Congratulations to Schola Patron, John Mark Ainsley, who has been awarded an OBE for Services to Music.
​https://www.thegazette.co.uk/London/issue/63135/supplement/B11

Applications are invited for the post of Conducting Scholar with Schola Cantorum of Oxford for the academic year 2020-2021. The Conducting Scholar will be an exceptional young musician who shows great promise in the art of choral conducting.
The successful candidate will assist the conductor Steven Grahl in the musical development and preparation of the choir, including programming and rehearsing. The Conducting Scholar will receive an annual honorarium of £300; regular podium time under the supervision of Steven Grahl and, where appropriate, performance opportunities with the choir. The Scholar will be expected to attend all weekly rehearsals (which are normally held on Monday evenings during term time) and Oxford performances during their scholarship tenure, and may be asked to take sectional rehearsals. In addition, they will be invited to attend meetings of the choir’s trustees (six per year), and assist the conductor with administrative matters relating to the musical life of the choir. The Conducting Scholar will be invited to sit on the panel for all rounds of major auditions at the beginning of the academic year, and from time to time throughout the year.
The post will be tenable for 1 year, for the 2020-2021 academic year. Candidates are expected to be members of Oxford University, and Oxford-based for this period.
Applications must be received no later than 12 noon on Friday 1 May 2020. Shortlisted candidates will be notified by the end of Wednesday 6 May.
Follow the links for further information and to download an application form. You can also read about the experiences of previous Conducting Scholars here.

​We are sad to announce that Lord Armstrong - Patron of Schola and former Chair of the Trustees died on 3 April 2020 at the age of 93.  An obituary can be found here. 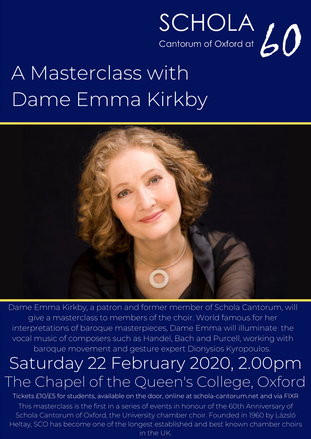 ​Schola presents the first event in its 60th Anniversary year: a Masterclass with Dame Emma Kirkby

​Dame Emma Kirkby, a patron and former member of Schola Cantorum of Oxford, will give a masterclass to members of the choir. World famous for her interpretations of baroque masterpieces, Dame Emma will illuminate the vocal music of composers such as Handel, Bach and Purcell, working with baroque movement and gesture expert Dionysios Kyropoulos.

Schola Cantorum is auditioning for all voice parts for this coming year.

'Self, Flesh and Air' - Schola commissions a new piece from Toby Young

Schola has embarked on an exciting new commission involving a collaboration between composer Toby Young, writer Jennifer Thorp and visual artist Whitney Conti. Toby has written a set of three madrigals, which aim to explore the lives of people living with mental illness in order to give voice to those affected by the trauma, isolation and stigma of their separation from society. Taking inspiration from cutting edge clinical research at the university, the 'difficult' nature of the subject matter is matched by equally challenging music.  The madrigals will be premiered in Oxford on Monday 17 June.

​As the new academic year approaches, Schola Cantorum, Oxford’s premier chamber choir, is looking for the best choral singers Oxford has to offer, of any voice part, to join its ranks. If you love singing at a high standard and want to be a part of the best chamber choir in Oxford, fill in the online application form to take part in our auditions happening w/c 1st October. We look forward to seeing you there!

Schola has returned back from its very exciting July tour to China. We were invited to perform as a demonstration choir at the 14th China International Choral Festival (CICF) in Beijing, and also at the Yellow River Choral Festival in Lanzhou. These invitations led to Schola performing at the opening ceremonies of both of these festivals (one of which was held in the 2008 Olympic Basketball stadium) as well as giving solo recitals at prestigious musical venues, such as the Beijing Concert Hall, and participating in choral conducting masterclasses, given by our director, Steven Grahl. And singing aside, we had the opportunity to explore sights of Beijing like the Forbidden City, Tiananmen Square and the Olympic Park, as well the Great Wall of China.
Lots of fundraising went into making this tour possible, not least the Alumni and Come and Sing Spem in Alium event held in the Sheldonian Theatre. We would like to thank everyone who helped make this tour possible; we are extremely grateful for the opportunity to have had such a musically fulfilling and culturally insightful tour.
For day-by-day detail of our China Tour, check out our tour blog!
https://scholacantorumoxfordchinatour.wordpress.com

​Schola Cantorum has been invited to China, where be performing as one of the 'demonstration choirs' in the 14th China International Chorus Festival (CICF) in Beijing. This is a hugely exciting opportunity for the current choir - and we want to ask whether you can help to get them there!  We have been working hard to find ways to help cover the costs of this tour through sponsorship, grants from colleges, and individual fundraising. At the moment, each student choir member would have to pay over £750 to attend, and we need your help to make this more affordable for them. Please see our Fundraising Page for more details.

In support of the fundraising effort the choir has created a new video featuring interviews with current choir member interspersed with clips of the choir performing with James Burton in 2017.

Schola Cantorum of Oxford would like to congratulate  Steven Grahl on his appointment as the new Organist at Christ Church Cathedral.  Succeeding Stephen Darlington, who has held the office for 32 years, Steven takes over a unique role. As well as being Director of Music for the Cathedral, and overseeing the world-class Cathedral Choir, he will also hold significant academic roles in the Faculty of Music in the University, as well as the College.  Steven will take up his new appointment in September 2018 and he is looking forward to combining this new challenge with the continuing development of Schola.   Read more

In this video, we interview our singers to find out, uncovering the diversity of their experiences, favourite Schola memories, and advice for interested applicants.

Schola Cantorum of Oxford is delighted to announce the appointment of Steven Grahl as Conductor from the 2017-18 season.  The appointment comes ahead of James Burton’s last concert as conductor scheduled for June 10. Schola are delighted to announce a second appointment, that of Daniel Mahoney to Conducting Fellow.  The Conducting Fellowship is a newly created post to develop a promising young conductor, and Daniel is the first person to receive the fellowship.

Steven Grahl has been Director of Peterborough Cathedral since September 2014 but is no stranger to Oxford having studied there, been a member of the Oxford University Faculty of Music, and worked at New College, Oxford for seven years.  Steven’s performances have been described as “truly inspired” and Schola Cantorum is looking forward to an exciting first season with him

Daniel Mahoney is completing an MA in Choral Conducting at the University of Birmingham under Simon Halsey and Simon Carrington.  He has been described as an “exceptional performer” and Schola Cantorum will be his first appointment in the UK.  There is a neat symmetry to Daniel’s appointment, he has come to the UK having sung in the Tanglewood Festival Chorus, a group which James Burton is leaving Schola to Conduct.

Schola is always looking for talented singers of all voice parts to join the choir- and there is no better time than the start of a new academic year.

An ensemble with a diverse and wide-reaching musical outlook, recent projects have included a collaboration with the Orchestra of the Age of Enlightenment at our 55th Anniversary Reunion concert, a sell-out performance of Duke Ellington's Sacred Concerts in with the Oxford University Jazz Orchestra, performances at the Ashmolean Museum's Live Friday events, and our most recent tours to Mexico and around the UK this year.
​
Applicants may be given a short piece to prepare and should bring a piece of their choice (ideally a solo song/aria from the classical repertoire)
and should expect to do some sight-singing and vocal exercises.
﻿Auditions will last no more than ten to fifteen minutes.

For queries or to set up an audition please e-mail the choir's auditions secretary, Melissa Talbot auditions@schola-cantorum.net
Tweets by @ScholaOxford