SCHOLA CANTORUM OF OXFORD
In addition to its regular concerts in Oxford and around the UK, Schola has undertaken a wide range of longer concert tours throughout the UK, Europe and further afield. In recent years this has included tours to France, Poland, China, Argentina, Israel, and Mexico, as well as around the UK.
More details of some of these tours can be found below, along with photos and concert repertoire. 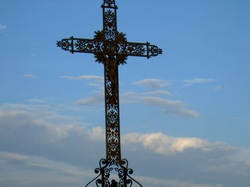 In July 2013, Schola travelled to France to give a recital at the St Donat Festival Bach en Drome, with renowned French composer and organist Thierry Escaich on the organ. The programme for the concert included Escaich's own Three Motets for 12 mixed voices and organ, Britten Rejoice in the Lamb, and Poulenc Litanies à la Vierge Noire, as well as motets by Tallis and Faire is the Heaven by Harris. 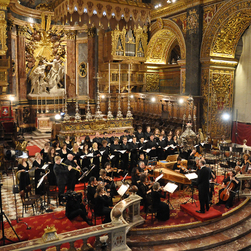 Schola were invited by the Orchestra of the Age of Enlightenment to take part in a collaborative concert as part of Valletta International Baroque Festival in January 2013. The repertoire included Vivaldi 'Gloria', Bach 'Magnificat', and Handel 'Zadok the Priest', as well as Bach's Suite no. 4 in D major, BWV 1069, and an encore by Benigno Zerafa, a Maltese composer. 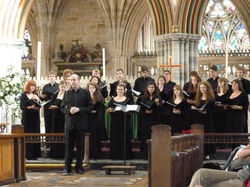 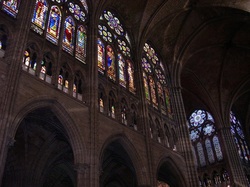 Schola  performed a large-scale performance of the St Matthew Passion under the baton of the distinguished American conductor, John Nelson. The choir performed alongside one of Schola's most prestigious alumni, mezzo-soprano Christine Rice and the Ensemble Orchestral de Paris. The performance, part of the Festival de Saint-Denis 2011, was webcast live on www.medici.tv and has also been released on DVD, available for £30 from info@schola-cantorum.net. For more information on this please see our recordings page. 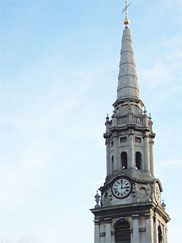 Drawing Schola Cantorum's 50th anniversary year to a close, the choir gave concerts in Kent and London in early September with a programme celebrating the art of music, including works by Byrd, Parry, Britten, Elgar and Harris.

The concerts also included the Kent and London premieres of James MacMillan's 'Bring Us, O Lord God', commissioned by Schola in memory of Lydia Press, a former member of the choir. 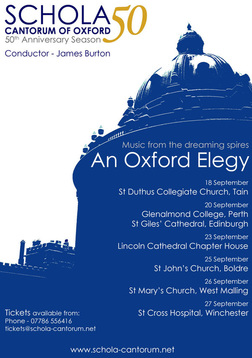 Schola Cantorum launched its 50th Anniversary year with a celebratory series of performances all over the UK from Edinburgh to the New Forest during late September 2009. Concerts featured a wide range of choral music written by composers closely associated with the University including John Taverner, who was the director of music at Christ Church College in the 1500's, and Hubert Parry who was professor of music at the University. Also including exciting recent works by Oxford graduates Howard Goodall, Quentin Thomas and Matthew Martin, Schola Cantorum's young singers performed an unforgettable series of concerts, led by their inspirational conductor James Burton who is one of the UK's finest choral conductors.

This tour was an excellent opportunity to provide a series of workshops and master-classes with schools and choirs spanning the length of the UK. Led by James Burton, the choir held workshops hosted by Fettes College, Glenalmond College, the Durham Singers, and Haileybury College alongside its eight concerts and recitals. With this educational series the choir aimed to encourage and inspire high-quality singing further afield than its Oxford base usually allows. 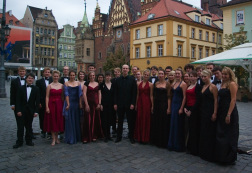 In September 2008, Schola travelled to Poland to perform at the Wratislavia Cantans, a major European festival of classical music, joining artistic director Paul McCreesh, the Gabrieli Consort, the Wrocław Philharmonic choir, the Poznań Boys’ Choir, a chamber orchestra formed of some of Britain’s most distinguished instrumentalists and the National Orchestra of the Polish Radio in two performances of Britten’s War Requiem. In addition to the Britten performances, Schola travelled to towns in the surrounding region of Silesia to sing four a cappella concerts of our own.  As the theme of the festival was British music, our a cappella programme sought to combine masterpieces from our own long and rich tradition of choral music with important Polish works from the Renaissance to the present day.

A journal of the tour with concert dates and venues, as well as the full concert repertoire and details, can be downloaded here. 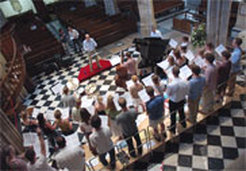 Schola were invited to Israel to give two performances of Handel's Israel in Egypt with the Jerusalem Symphony Orchestra, conducted by Laurence Cummings. They also travelled to Tel Aviv where they performed in the city's arts centre. 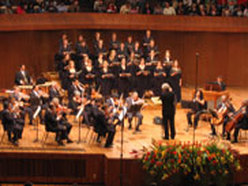 Schola travelled to China in September 2007. It was the first official trip to China by an Oxbridge Choir and aimed to promote cultural exchange between UK and China before the Olympics in 2008. Highlights included performances in the Forbidden City Concert Hall in Beijing, and the Shanghai Oriental Arts Centre.

A copy of the repertoire from the tour can be downloaded here. 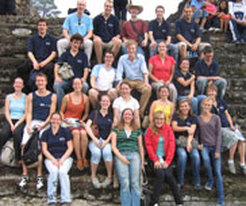 Following its successful tour in 2004, Schola was invited to return to Mexico in 2006. At the invitation of the British Council, OFUNAM (the resident orchestra at La Sala Nezahualcoyotl, Central America’s most renowned concert hall), and the Anglo-Mexican Foundation, the choir undertook a highly prestigious series of concerts, including both collaborations with OFUNAM and a series of a cappella concerts.

More information and a copy of the repertoire from the tour can be downloaded here. 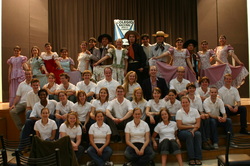 Schola were invited by the Association Argentina de Cultura Inglesa to undertake a two week tour of Argentina in September 2005, supported by the British Council and HM Ambassador to Argentina.

A variety of performances took place in Buenos Aires: in the Teatro Colon (South America's largest concert hall); in the Cathedral of San Isidro; in the Iglesia del Pilar, the oldest church in Buenos Aires; in the British Arts Centre; and in la Casa de la Cultura.

The tour also involved a journey north from the city, to Mendoza and San Juan, and a shared workshop and concert with the University Youth Choir of Cuyo, in the famous San Juan concert hall. This was a fantastic opportunity for choir members to meet singers of their own age from a different cultural and musical heritage,  and experience
different styles and methods of choral singing. 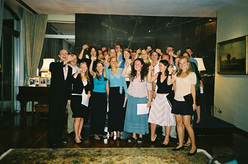 In September 2004, Schola performed six concerts in Mexico. Our aim was to bring music from the English choral tradition to an audience who had perhaps not experienced live choral music. We also sought to perform music by contemporary British composers, such as Francis Grier, Kenneth Leighton and James MacMillan, some of whose pieces we premiered in Mexico. At the same time, we charted the development of sacred music in our programme ‘Cinco siglos de música sacra’. From John Taverner’s ‘Dum transisset Sabbatum’ through Allegri’s ‘Miserere’, Bach’s ‘Komm, Jesu, Komm’ and music by Brahms and Rachmaninov to Francis Grier in the twentieth century. Grier was organist of Christ Church Cathedral, Oxford, almost exactly five hundred years after John Taverner had occupied the same post.

A journal of the tour with concert dates and venues, as well as the full concert repertoire and details, can be
downloaded here.